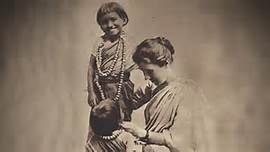 Amy Carmichael was born on December 16, 1867 in a small village in Ireland to David and Catherine Carmichael. She was the oldest of seven children and was a very adventurous child while growing up and was often mischievous especially among her siblings. Her parents were devout Presbyterians and her father owned a flour mill business. Amy grew up in a very caring and loving family, and she lived very comfortably, and went to the best boarding schools. However when she was 18 her father died and the family went into a time of financial insecurity and Amy was faced with the responsibility of raising her brothers and her sisters, and had to drop our of school to do so. Yet it was during this time in 1887 that Amy attended some spiritual conferences called the Keswick Conventions that God would use to change her life. At the Keswick Convention Amy heard the great missionary Hudson Taylor speak of how every hour 4,000 people are dying without Christ. Amy would later write in her journal of the words of Hudson Taylor writing “Does it not stir up our hearts, to go forth and help them, does it not make us long to leave our luxury, our exceeding abundant light, and go to them that sit in darkness?”

As a young woman she began to work with the poor women of Belfast, Ireland and would often go out on Saturday evenings with her pastor to the poor neighborhoods to hand out tracts and food to the poor. She began to work with a group of people called the Shawlies who worked in the textile mills. They were called the Shawlies because they were so poor they could not afford hats and they had to use shawls to keep their heads warm. Yet they were eager to hear about God and Amy spent much time with them and would even sleep in bug infested beds just to be with these people. She began to pray for a church for them and without asking anyone for money, God providentially provided the means and the building for these churches.

Amy began to fell the call of God to overseas mission work but she had an illness that would seek to keep her in pain and bedridden. Despite the illness Amy followed through with the call of God and she applied with the Church Missionary Society and was accepted. In 1892 she was given her first assignment in Japan, yet when she got there she found the country rough and hard to adapt to. Yet the biggest disappointment was that the missionaries seemed very carnal and worldly, often gossiping among each other and hardly doing anything to reach others for Christ. She felt that after a year that God no longer wanted her to stay in Japan and in 1893 she returned to Ireland.

Amy felt again the call of God to overseas mission and she heeded the call and went to India in 1895, where she would spend the rest of her life. She had committed herself to the Lord that she would be single for the rest of her life in order to commit herself fully to the Lord. She went to Southern India, in Bangalore and met with two missionary couples there. When she got to India she learned the Tamil language and began to travel to the villages to preach the gospel as an evangelist. During her travel to the villages there were several women who were converted to Christ. She began to meet with them to disciple them and she called her group the Starry Cluster. As they prayed they felt God lead them to go to other areas to share the gospel. As result the made there way to Dohnavur in which would change the course of her minstry. On a trip to one of villages of that area, Amy met a little seven year old girl whose name was Preena. She was brought to Amy by another woman, as it was the little girls second attempt to escape the Hindu temple in which she belonged. Many Indian children at the time were dedicated to the gods by their parents and became temple children and that meant being prostitutes. The little girl was afraid to go back to her mother and begged Amy to stay with her. The last time she tried to run away and was returned they had branded her hands with hot irons. Yet this little girl in desperation escaped again wanting help. Amy at the risk of her life and prison, decided to take the child in and not have her return. The little girl upon seeing Amy walked over to her immediately sat upon her lap and said “Amma” which means mom. Amy fell in love with the little girl and said that “I will her and we will care for her no matter what.”

It was then in 1901 that Amy started the Donhovar Fellowship which was a ministry founded to help orphans in South India and to rescue those involved in temple prostitution. She began a school for them that they would know the gospel and give them a Christian upbringing. As result many of the temple priests caused much havoc in Amy’s life accusing her of kidnapping and pressed charges against Amy that were not dismissed until 1914. They would burn down her buildings, call her demon woman, and would spread all kind of rumors about her and harass her. Not only did she receive criticism from the priests but also many fellow missionaries criticized her for her ministry efforts as well. Amy would spend the next 56 years of her life dedicating herself to help and serve these children who would refer to her as “Amma” which in their language meant mom. Never one time did Amy take a furlough to go back home to Ireland but gave her life for the sake of the children that they might know the gospel.

When Amy was a young girl about 3 years old, her mother had taught her that anything that she asked in prayer God could do. She decided to that one day while looking in the mirror that she wanted to have blue eyes instead of brown, and she prayed that God would change the color of her eyes. However it didn’t happen, but she would later recall that story with amusement. Yet it is interesting to note that when Amy rescued the temple children, she would rub dirt on her skin to blend in and would wrap a sari around her to blend in. Yet it was her brown eyes the matched the color of the people that left her undisguised, and if her eyes were blue would have given her away. As result she was able to rescue hundreds from the evil that were trapped in and set them free. She often had said had it not been for those brown eyes that God gave her that she would have been given away as a foreigner.

In 1931 when Amy was 64 years old she experienced a great fall in which she became a semi-invalid for the last 20 years of her life. Yet that didn’t stop her from doing the Lord’s work she was called to do. Amy was a very talented and gifted writer in which she wrote over 35 books along with hundreds of poems and hymns. Amy Carmichael the great missionary who spent 56 years with the children of southern India went to be with the Lord in 1951 at the age of 83. The Donhovar Fellowship that Amy started still continues to this day to effect thousands of lives in India. The body of Amy Carmichael is buried in the middle of the campus under a fountain that say upon it “Amma.” Amy once said that above all things that the one thing that mission work does is that it offers one thing and one thing only “A chance to die.” Amy died to herself and lived it for Christ on behalf of the temple children of southern India, and the effects of her work are still resounding today.